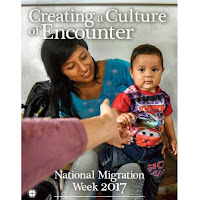 “Because I have human dignity.”

These words were spoken to me by a teenaged Honduran boy who had fled gang violence and migrated to the US.  He was staying in a shelter awaiting his court date. As a legal assistant at a pro bono law firm, I was interviewing him to determine what form of legal presence he might qualify for.

“Porque yo tengo dignidad humana,” was his response to my question of why he left Honduras – spoken with a firm sense of self-worth and maturity far beyond his years.

Human dignity - the belief that each human being is sacred and created in God’s image - is the bedrock of Catholic Social Teaching.  Regardless of a person’s age, race, gender, nationality, sexual orientation, economic status, ability/disability, or any other factor, Catholics affirm dignity is always present.  Each and every person is precious in God’s eyes – no matter what.

This past January’s “National Migration Week” had the theme “creating a culture of encounter.”  Encounter – encuentro – is a core idea in Francis’ papacy.  When we go out to one who is different from us, recognizing their dignity, we grow in solidarity with our human family.  As the Honduran boy’s words challenged me, we are challenged to stand up and stand with those whose dignity is threatened.

Where do you see human dignity threatened in our nation and world?  How can you create a culture of encounter?